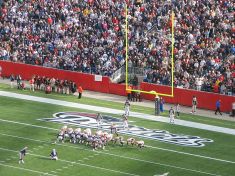 The current state of goalposts in football calls for a change. With the current width, there is no challenge for kickers to make field goals. Image Source.

Football has been around since the late 1800s.  The first organized game was played on November 6, 1869 between Princeton and Rutgers using London Football Association rules.  The playing style of the game back then was simple, rudimentary, and continuous—essentially soccer—with 25 players playing on a team at once, quite different than the physically punishing, complex, and fast-paced play of today, which has eleven players playing at a time. While football has changed a lot since that first game, one thing that has remained constant is the presence of goalposts.  Goalposts have been a staple in football, but they have gone through their own redesigns and changes as well.  At first in the NFL, goalposts were a simple “H-shaped” contraption with two posts coming out of the ground. However, in 1967, they moved to a “sling-shot” goalpost that has one curved post in the ground so the post could be more out of the way. In addition to style, goalposts have changed locations on the field before, too.  Originally, they were in the back of the end zone, but were moved to goal line in 1933 in an attempt to try to increase scoring, only to be moved to the back again in 1974.  Goalposts have evolved over time, just as the game has.

However, the current state of goalposts and kicking in football does not call for another change to the type or placement of the uprights; rather we should change the width between them. As the game of football has advanced, so too has the quality of kickers. They have changed extra point attempts and field goal attempts from a doubt into a sure bet. Distances that were once considered far are now average, and distances that were once considered impossible are now possible. A field goal, which was once a challenge, isn’t a challenge anymore. The abilities of the kickers must be tested more, and a solution to this dilemma is to make the goalposts narrower.

Along with the goalposts and the playing field, the art and quality of kicking has advanced and improved over time.  Since the 1960s, kicking percentage has risen, which suggests that kickers have gotten a lot better.  For field goals of 50 yards or more in the NFL, the percentage grew from 13.1% in the 1960s to 53.0% in the 2000s.  As a result of this increase of quality of kickers, it has become less of a decision for coaches to choose between kicking a field goal with the prospects of scoring the three points or giving the other team bad field position by punting, pinning them deep in their own territory.  Coaches now have easier decisions to make because of this decreasing dimension of uncertainty and growing dimension of certainty.

With this increase in field goal percentage over time, recently, talk of taking extra points or point after touchdowns (PATs) out of the game has also increased.  Skip Bayless of ESPN dramatically stated, “Eliminate it,” and, “Give place kicking the boot.”  He calls to “force supremely talented offensive players to keep doing what they do best.”  Bayless is not alone.  NBC Sports Mike Florio suggests taking extra points out of the game as well, although for different reasons.  Florio says, “The high success rate coupled with the injury risk outweighs the very slim drama of a possible miss,” but also because it “would give the replay officials a little extra time to determine whether a full review of the touchdown is needed.”  However, contrary to these opinions, I think otherwise.  Instead of taking kicking out of the game of football, which would render kickers useless, I think that there is another way to keep kicking as a part of the game.  Regardless of extra points or not, there is always the risk of injury in football and the factor of human error.  The solution is to make kicking extra points harder and consequently make extra points and field goals more of a decision. 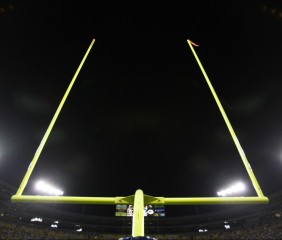 Kickers have pushed standards, calling for the goalposts to be narrowed. The goalposts should be narrowed to a width of 10 feet 6 inches. Image Source.

In order to make kicking harder, I propose to make the field goalposts narrower to a width of ten and a half feet.  I am not alone in this proposition of making them narrower.  Sam Farmer of the Los Angeles Times says that “the league should consider reducing the current width of eighteen feet, six inches, to create more intrigue with field goals and maybe even extra points.”  With a change like this, it would make extra points and field goals effectively harder because it would reduce the angle at which the kicker has to put the ball through the upright.  With a width of ten feet, six inches, using simple trigonometry, the angle a kicker has to make an extra point (from kicking point to each of the uprights), which is from 20 yards away, decreases from 17.44˚ to 10˚ or a 43% decrease.  From further out, the angle of a fifty yard field goal decreases from 7.06˚ to 4.01˚, also a 43% decrease.  With this new proposed with of ten feet, six inches, a short twenty yard extra point attempt is roughly equivalent to a thirty five yard field goal with the current uprights, in terms of kicking angle.  The effects of this decrease in field goalpost width will have an impact on the game of football right away.

No matter, how you look at it, football is a tough sport, and kicking is no different.  Just like anything else, kicking has evolved from a much more crude form in its early days of straight-on approaches to the ball, to a very specific and skillful movement of today with kickers utilizing a soccer style angled approach to the ball.  With this evolution, kicking statistics have improved exponentially as well.  This doesn’t make it any easier, just that it has been perfected over time.  The dimension of uncertainty for coaches to decide whether to kick a field goal or go for it on fourth down is now gone and a dimension of certainty is in place.  When teams get the ball down to anything inside of the 35 yard line, fans expect that their team will come out of the drive with at least three points.  However, with the narrowed field goalposts, that old dimension of uncertainty would be restored. Since the kickers’ target would be smaller, it would be a harder kick to make. Coaches would have to make a tougher decision to kick a field goal or not, and fans would be kept on the edge of their seat.

With the current state of kicking in the NFL, a change must be made because it isn’t even a contest anymore.  Kickers are so good that they can make almost anything within a distance of fifty yards.  In 2014, kickers in the NFL made 88.2% of kicks under fifty yards combined.  Even from within sixty yards, it is a fifty-fifty chance that they can make it.  So, in order to make it a challenge for kickers, the field goal goalposts must be made narrower to a width of ten feet, six inches.  Kicking field goals will once again become a challenge for the kickers to perform and more exciting for fans to watch. Kickers are continually pushing the boundaries in football and deserve to be more a part of the game decision making process.

Football Origins, Growth and History of the Game. (n.d.). Retrieved April 28, 2015, from http://www.thepeoplehistory.com/footballhistory.html

One response to “Changing the Current State of Football Goalposts”