California’s current scarcity of water, which began in 2011, is the worst drought in the hundred and twenty years that the state has recorded water-related statistics. Due to The Golden State’s increasing population and economic success in the past decades, the San Joaquin River is barren, the Colorado River is so overtaxed that it ceases to reach the sea anymore, and groundwater levels are falling. As a result of the extreme drought, there were also record-breaking numbers of fatalities and cases related to the West-Nile Virus in 2014, with 31 deaths and 801 cases recorded. As a result of California facing one of the most severe droughts on record, on April 1st, Governor Jerry Brown issued an executive order requiring municipalities throughout the state to reduce their water use by a total of twenty-five percent, compared to 2013 levels, by February 2016. This order includes reducing the amount of water delivered to residents by local water-supply agencies, restricting the use of water on golf courses and other green landscapes and replacing 50 million square feet of lawns with drought-tolerant plants.

Since the drought began, however, politicians and lawmakers have focused on short-term measures to mitigate the issue at hand. Unfortunately, there is evidence to suggest that this drought will continue in the years to come as a result of climate change. If this indication is accurate, then long-term solutions need to be enacted. One practical solution would be the state-wide implementation of large-scale desalination plants, which essentially filter and remove salts and minerals from saline water to produce potable water. This extreme and obdurate issue cannot be solved immediately, but we can mollify its long-term effects.

Visual and current data depicting the intensity of the severe drought conditions throughout the state of California. Image Source.

Severe droughts are forcing researchers to rethink how technology can increase the supply of fresh water. One decades-old solution to this problem includes the process of reverse-osmosis – a process that is utilized by substantial desalination facilities around the globe. In a nutshell, water is put under high pressure and forced through semi-permeable polymer membranes. The polymer permits the freshwater molecules to pass through while leaving behind salts and other minerals. Ten miles south of Tel Aviv, for example, Israel has built the world’s largest modern desalination plant, which provides twenty percent of the country’s freshwater. At a cost of about $500 million, the recently finished plant in Israel, named Sorek, produces 627,000 cubic meters of potable water daily. Sorek helped Israel, which is sixty percent desert, cope with a seven-year drought between 2004 and 2010, during which time the country depended completely on groundwater and rain. Currently, Israel has four reverse-osmosis facilities up and running. In total, these plants account for forty percent of the country’s freshwater supply.

Singapore, a densely populated island with approximately 5.4 million individuals, has no natural water resources, making water control a substantial obstacle. In the past, Singapore has relied on imported water from neighboring Asian countries; however, in the last few decades, Singapore has invested in multiple water technologies that allow them to have smooth control over water management. One such strategy Singapore has employed to address its water scarcity issue is desalination. Tuaspring Desalination Plant, the country’s second large-scale desalination plant created in 2013, produces a total of 318,500 cubic meters of freshwater per day, making it the largest desalination plant in South East Asia. Its technologically advanced design also allows the plant to reduce its physical carbon footprint per cubic meter by more than thirty percent. In combination with the first reverse-osmosis facility, desalination accounts for twenty-five percent of Singapore’s freshwater needs. Other countries, such as Australia and Saudi Arabia, have already begun to utilize this method of supplying potable water to its citizens, providing evidence that expansive desalination plants are a utilitarian way of increasing the supply of freshwater to drought-affected populations.

The feasibility of funding large-scale desalination plants is actually a simple process, consisting of obtaining proposal approval and legislative support. For the purposes of simplification, I will use an exemplary paradigm of this process through the approval of the Carlsbad Desalination Plant in San Diego, California. To begin with, Poseidon Resources (PR), the private developer of the desalination plant in Carlsbad, had to develop a Water Purchase Agreement with the San Diego County Water Authority. This agreement outlined “proposed commercial and financial terms for the production and delivery of water from the planned desalination plant to the Water Authority’s regional water delivery and treatment system.” They also intended to gather 100 million gallons of seawater per day, use reverse-osmosis to produce 50 million gallons of fresh drinking water, and then empty the remaining water back into the Agua Hedionda lagoon. Eventually, the San Diego County Water Authority Board of Directors approved the Purchase Agreement. In order to finance the project, the California Pollution Control Financing Authority agreed to issue $840 million in bonds to PR. Along the way, PR ran into some legal accusations regarding the plant’s effect on marine life; however, the 4th District Appellate court ruled in favor of PR. In partnership with the S.D. County Water Authority, the project was fully financed at $922 million, securing all funding needed to build the Carlsbad Desalination Plant. Finally, PR publicized that IDE Technologies LTD will design and build the project. As you can see, the manageable process of commissioning a desalination plant is similar to approving the construction of an office building or a school, giving evidence to the feasibility of large-scale desalination projects. 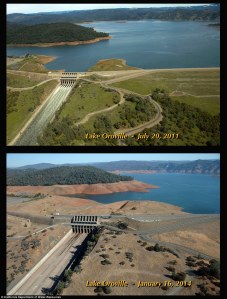 Before: Water cascades down the Oroville dam in January of 2011. After: Parched lake shown at record-low levels in January 2014. Image Source.

Critics argue that these large-scale desalination facilities are terribly expensive to build. It is true that these facilities are excessively high-priced (estimated $1 billion for the Carlsbad Plant). However, given the current and increasing climate change happening globally, specifically regarding the severe drought in California, does money really have a higher value than human lives? The U.S. Census Bureau estimates the population of California to be approximately 320.09 million for the beginning of 2015. Just last year, there were 31 deaths and 801 cases reported due to the West-Nile virus, speculated as a result of the severe drought. Imagine the negative impact that this growing deficiency of water could have on the population at large. With the combination of increasing climate change and the scarcity of water, California could experience numerous wildfires, thus contaminating water supplies. The Golden State would no longer be considered ‘golden,’ but instead a fiery wasteland. Freshwater is a crucial necessity of human survival, not money. If the purpose of desalination facilities is to provide freshwater, and thus life, to people in dire need of it, then I believe that we should invest in large-scale desalination machines because the benefit will outweigh the cost.

Critics also argue that desalination projects waste huge amounts of energy, thus having a detrimental effect on the environment. However, technology has improved enough so that we don’t have to rely on old methods of energy anymore, like diesel fuel. For example, the world’s largest solar powered, “jellyfish-fightin’” desalination plant is in the process of being built in Saudi Arabia. Foreseeable in the near future, this plant will use solar technology and renewable energy to combat both costs and emissions. The Al Khafji desalination plant will be energy efficient, thus including energy recovery, energy storage, and other efficiency systems. In addition, the University of Colorado is already developing a new type of water treatment process that has the ability to desalinate water, treat wastewater, generate electricity, and produce hydrogen by way of a microbial fuel cell. This provides evidence that ample desalination plants are an effective and worthwhile method of increasing the supply of purified water, while minimizing energy costs.

California’s drought, now in its fourth year, is the most extreme drought the state has ever experienced since it started recording water-related data. Rivers that regularly led into the ocean, such as the Colorado River, do not anymore. Groundwater levels are declining and the San Joaquin River is completely dry. Reservoirs throughout the state are shrinking and as a result, Governor Jerry Brown issued an emergency executive order requiring residents throughout the state to reduce their water use by a total of twenty-five percent. Something of this magnitude is unprecedented. In order to sustain habitable living conditions within California, I propose a solution of large-scale desalination plants, which take hundreds of thousands of gallons of seawater and convert it into potable freshwater for everyone. Evidence of recently constructed desalination facilities has already shown to produce a high supply of freshwater for citizens, such as Sorek in Israel and the Tuaspring Desalination Plant in Singapore. The feasibility of approving and funding a reverse-osmosis project has indicated that it is a fairly simple process, requiring legislative support and financial reinforcement. Critics belabor the point that desalination facilities require ridiculous amounts of money to fund and waste a substantial amount of energy. However, is profit more important when compared to human lives? In addition, our technology is advanced enough that we can reduce the amount of energy required to produce freshwater, as shown by Saudi Arabia’s ‘jellyfish-fightin’’ plant and University of Colorado’s new four-in-one method of creating potable water. These facilities are not the only solution to cure the drought, but they are a viable solution that will immensely help supply water in the long run.